Advancing together with the Czech people 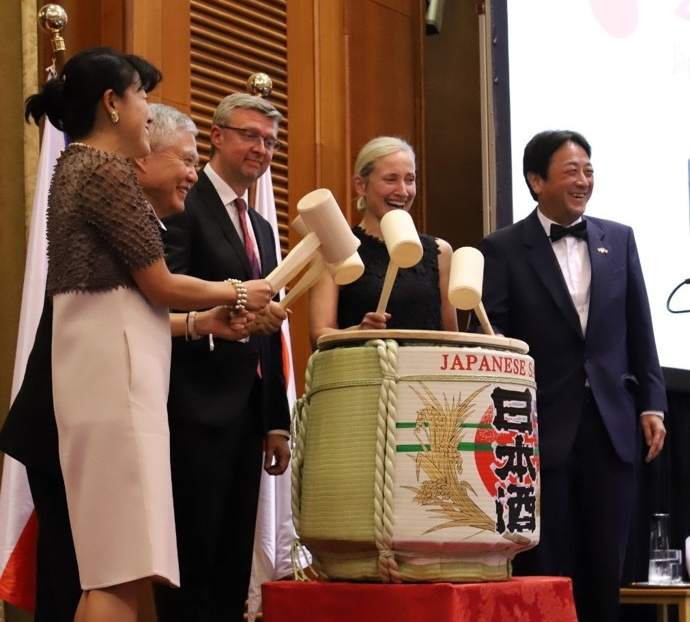 History and activities of Japanese Chamber of Prommere and Industry in the Czech Republic (JCCI “Shokokai”).

JCCI was established in 1994 and now the number of membership companies has reached 164 (as of February 2021). In September 2019, “25 years anniversary reception” was successfully held with the honourable attendance of His Excellency Mr. Karel Havlíček / Minister of Industry and Trade, Her Excellency Mrs. Jana Maláčová / Minister of Labour and Social Affairs, His Excellen-cy Mr. Kaoru Shimazaki / then Japanese ambassador to the Czech Republic and many other guests from Czech government and community. Our main purpose of activity is to support Japa-nese companies operating in the Czech Republic, to contribute to strengthening economic and business relations, and to promote friendship between both countries. We would like to take this opportunity to look back on the history and development of Japanese companies and activities of the JCCI.

Japanese companies in the Czech Republic

The number of Japanese companies in the Czech Republic currently counts 276 (Source: JETRO PRAHA as of February 2021) out of which 108 are manufacturing companies. They have in total invested US$ 3.8 billion, ranking 2nd in value after Germany, and creating over 51,500 jobs. These figures are accumulation of continuous and long-term investment activities indicating how Japanese companies have regarded the Czech Republic as one of the most important business partners. 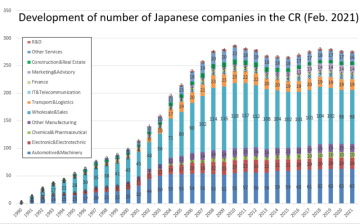 Looking back at the history of Japanese companies in the Czech Republic, it can be classified into roughly three periods. These are (1) the dawning period until the mid-1990s, (2) the new establishment boom from the late 1990s to mid-2000s, and (3) the period from the financial crisis till today — a time of recovery, localization, diversification, and innovation.

It was in the mid-1990s — after the Velvet Revolution in 1989 — that Japanese investment be-gan in earnest to investigate establishing new production bases in Central and Eastern Europe, while the Czech economy and industry developed significantly, and the Czech Republic started negotiations to join the EU. Japan External Trade Organization (JETRO) established its Prague office in 1993, and the JCCI was set up within that office in 1994, starting with 25 member companies, which was enormously supported by CzechInvest. The first large investment was announced by Matsushita Electric Industrial- Panasonic in early 1996. This project opened doors to the Czech Republic for many other Japanese investors. Key factors for companies choosing the Czech Republic were not only geographical accessibility to Western Europe and highly skilled workers, but also the strong support of the Czech administrations and related organizations.

Another influential milestone was the establishment of Toyota Peugeot Citroen Automobile (TPCA) in 2002. Toyota Motor Manufacturing Czech Republic, s.r.o. (TPCA changed company name in January 2021 and is fully owned by Toyota) is one of the largest Japanese companies in the Czech Republic with a yearly production capacity of 230,000 cars mainly for the European market. This investment generated around 3,500 jobs and hugely contributed to attracting many other Japanese companies of various industries to set up business here. The number of Japanese companies increased continuously until the mid-2000s while the country solidified its status as a centre of manufacturing in Europe.

The 2008 financial crisis and the global recession that followed hit Japanese companies seriously. However, they managed to overcome this period through tireless efforts to improve production efficiency and their products. They also accelerated localization of their management and opera-tion by promoting local staffs. The number of new establishments in recent years is not at the high pace of the early 2000s, but the style of investment has diversified from green field to alli-ances or M&As with local companies and the types of industry have also expanded.

In recent years, Japanese companies have tackled business innovation by further improvement of production efficiency with the introduction of robotics and AI. Several companies have started manufacturing most progressive products for Electric Vehicles etc and have set up R&D function in the Czech Republic. Amid a dynamically changing world economy, Japanese companies start considering the Czech Republic as strategical important base not only within Europe, but within the scope of global supply chain networks.

Activities of the JCCI

In March 2015, a dialogue between the Czech government and Japanese companies was held at Prague Castle with the attendance of His Excellency President Miloš Zeman. This was organized by JCCI and JETRO Prague in cooperation with Ministry of Industry and Trade and CzechIn-vest. 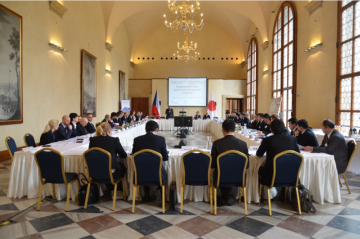 JCCI has also co-organized annual round table meetings together with the Czech-German Cham-ber of Commerce since 2013. German and Japanese industries share common interests due to its manufacturing-oriented structure. Czech government officials and related organizations are invit-ed to exchange opinions for further development and improvement of the business environment in the Czech Republic. Through such meetings and lively discussions, some progressive measures contributing to Japanese companies’ activities have materialized.

Another important activity of JCCI is to organize occasions to provide useful local information to membership companies. Since 2010, we have made annual visits to local companies and there have always been new findings through such visits to respectful traditional Czech companies.

The biggest regular event is monthly meetings which usually attracts attendance of over 100 par-ticipants. We are honoured to have welcomed following Czech VIP speakers from various fields, which shows the long-term and close relationship with Czech government and the local commu-nity: 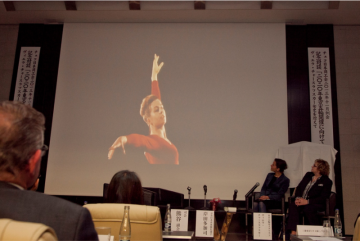 Mr. Přemysl Sobotka, the President of the Senate AT the time, Mr. Josef Lébl, one of the founders of CzechInvest and a great supporter of Japanese investment, Mrs. Věra Čáslavská, a gold medalist of gymnastics at the Tokyo Olympic games in 1964, Mrs. Kateřina Fialková, a former Ambassador of the Czech Republic to Japan, His Excellency, Prime Minister Andrej Babiš, delivered a speech for us in Nov 2016 while Depu-ty Prime Minister and Minister of Finance, Mr. Jiří Rusnok, the Governor of the Czech National Bank.

We would like to express our utmost gratitude to everyone in the Czech community for the con-sistent and long-lasting cooperation and support to Japanese companies. Although we are all fac-ing difficulties due to the COVID-19, we strongly believe that we can overcome this crisis as we have done so in the past. JCCI is committed to contribute to further development of relationship between both countries for another 100 years to come.